This is probably would have been better suggested to ecobee themselves, but my guess is that would be less likely.

I recently added a few more sensors, and when I got them, I wanted to see how accurate they are. (don’t care about absolute accuracy, as I don’t have a calibrated reference anyways, but relative to each other is more important),

I placed my 5 sensors on a platform against the wall, and within 6" of the ecobee itself. I placed a shelf below them which would have blocked airflow (and to hold them at the same level as the ecobee). This should provide for a very similar observed temperature.

The sensor accuracy specification from ecobee’s web site is +/- 1F - Which should mean that all of my sensors should be within 1.1C of each other (Would think that a Canadian company could provide specs in C, but hey, I can convert)

After my 5 hour test, the worst case instantaneous difference seems to be 1C, so they are all within spec. Individual reading times would account for some of the difference, as I assume that the sensors likely report on their own schedule, but still… all in spec.

What would be nice, is a way to celebrate all of the sensors, or allow a manual offset to be entered for each sensor. At least at the point of calibration, the lines would look closer to each other, I can see them drifting some amount over time, but a regular (yearly?) celebration could be done to validate accuracy/consistency.

I can imagine that most people would be happy with the accuracy as it is, but lets also agree that allot of people who buy multiple sensors are probably a bit of stats geeks

Is something that would be interesting, or doable? 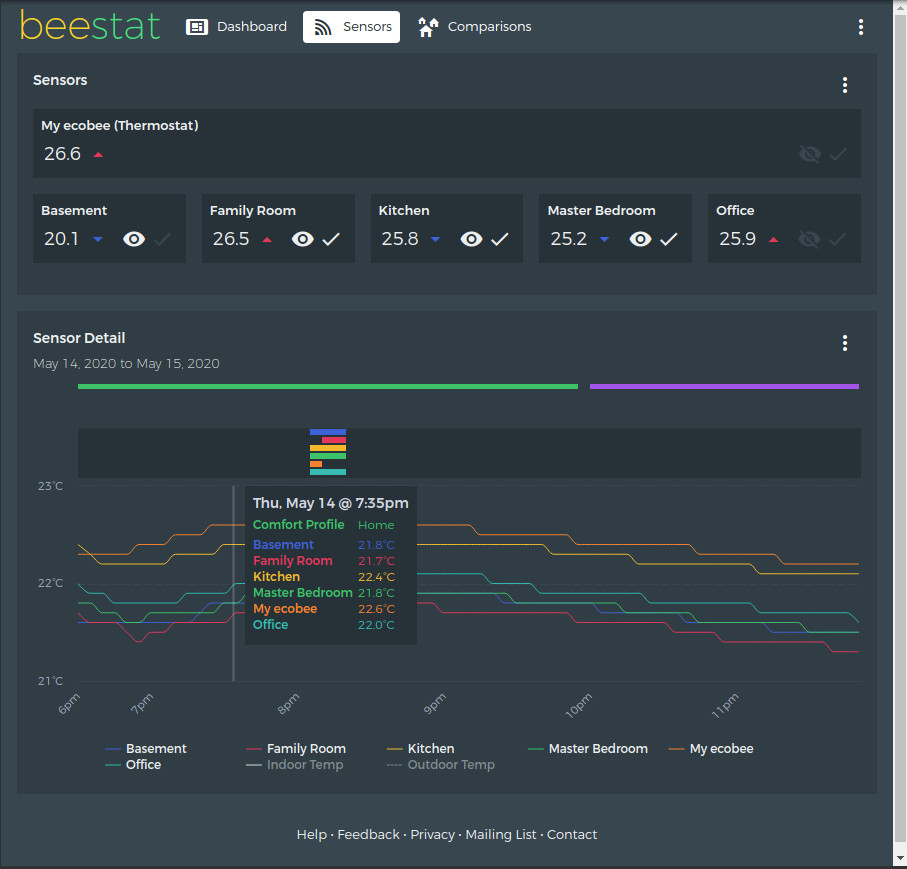 This isn’t something I’ve thought of before. It’s doable and wouldn’t be too terrible. If I allowed this sort of configuration in beestat what I would do is store the values I get from ecobee exactly. I could then apply an offset any time that data is read and displayed in the GUI or a data export.

What it would not do is save anything historically. So say you set your Family room to +0.5°C today, then tomorrow set it to +1.0°C, the historical data would appear to change. Or if you set the offset, downloaded a CSV from beestat, changed the offset, then downloaded it again, the data would be different.

As long as you’re OK with the historical data changing like this it’s a feasible enhancement. Thoughts?

I think that would work fine. I would expect that the sensors should not drift too much over time. I assume that the differences are mostly due to tolerances in components.

I agree that the source data should not be touched. Modifying the output makes allot more sense.

Would be easy to validate the constancy over time. Just repeat the test in a year. Even so, I have to guess that they would be more similar than they are today.

Just noticed that the subject of the request had some auto-correct magic work done on it. I was a bit premature in my celebration

https://community.beestat.io/t/137 Add support for calibrating the viewed tem…perature output of sensors. Might as well do thermostats as well. My initial thought is to put this on on an equipment card on a settings page.

Migrating a couple comments from GitHub:

There is an option in the thermostat that I am experimenting with. (Settings → Installation Settings → Thresholds → Temperature Correction)

Temperature Correction: If you notice that the ecobee’s temperature sensor may be slightly off, you can adjust this + or – 10 degrees for a more accurate reading.

Looking to see if this affects the downloaded data. The description seems to indicate it is a display offset, but I have changed mine to the maximum offset. Will look to see a big swing in the one temperature.

Confirmed. The setting mentioned above is a offset for the in-thermostat temperature sensor. The offset is reflected in the data for that sensor that beestat downloads. The displayed temperature on the thermostat appears to be the calculated temperature based on all the ecobee magic (occupancy, sensor active during comfort setting, etc). So, I would think that you would not want to give the option to offset the in-thermostat sensor data.

In favor of keeping beestat as a view of your actual ecobee data, I have no plans to add any sort of sensor offset setting. I think the data is better corrected at the source.

This topic was automatically closed 7 days after the last reply. New replies are no longer allowed.